BEACHWOOD, Ohio — Philip and Adrienne Goldberg were tired of living with a kitchen stuck in the Reagan administration.

“Not that it was ugly. It was really dated,” says Adrienne. The placement of the appliances was awkward, and there wasn’t enough storage. Floor-to-ceiling curtains in the kitchen nook blocked view of the outdoors.

The Goldebergs’ new kitchen, remodeled by contractor Frank Makoski of Makoski Construction and Remodeling in Chesterland, is much more comfortable and inviting. Often, they invite a couple to their home for pre-dinner cocktails before the four friends head to dinner. Guests gravitate to the updated kitchen, and they don’t want to leave.

They prefer an evening spent sipping wine around the kitchen’s two-tiered island, surrounded by lighted cabinets that highlight vases from the Goldbergs’ travels. Or they’ll gather around the granite table in the kitchen nook, with its artwork and floor-to-ceiling windows.

When Adrienne sees that no one is reaching for their coats, she’ll say, “Take your shoes off; we’ll cancel the reservations and get takeout.”

The Goldbergs moved into this home 26 years ago. It was built in 1989 as a dream home for a family who briefly lived in it before the family was transferred. Several years ago, the Goldbergs and Makoski embarked on updating the home, room by room. In 2013, their focus was the kitchen and its adjoining kitchen nook.

The Goldbergs and Makoski spent five months brainstorming ideas for how they wanted the rooms to look and function. The planning took longer than the actual work, which was completed in three months. The homeowners declined to give their ages or say how much they spent on the renovation.

The new kitchen has a two-tiered island with a cooktop, custom cabinets and wine tasting area with a mini fridge. An expanded pantry has a coffee and breakfast bar. There’s more cabinet space, counter space and room to cook. 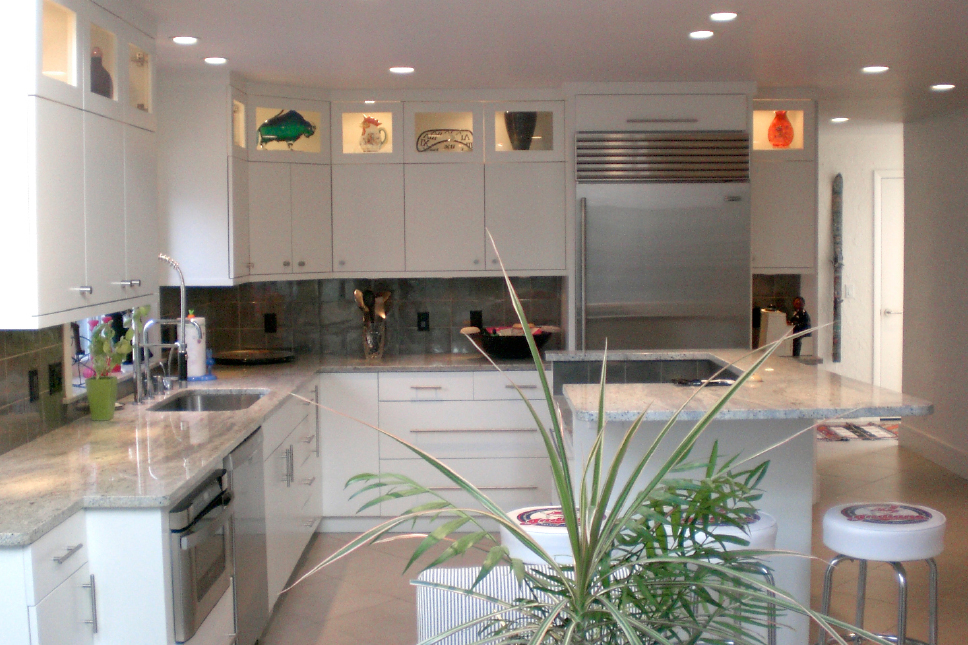 Appliances were moved, and storage added. Space was taken from the adjoining laundry room to create a large pantry with a breakfast and coffee center. Countertops were made deeper, so they were easier to work on.

The oven and refrigerator, previously side by side, were separated. The old arrangement placed the least-used appliance (oven) next to the most-used appliance (refrigerator), says Makoski. “It’s not an attractive look when you put them next to each other,” he adds. The homeowners took this opportunity to replace some appliances.

In the old kitchen, the microwave was set into the upper cabinets. Now it’s set into a lower cabinet and slides out with the push of a button.

A kitchen is more than appliances, and this remodeling job acknowledged that by emphasizing beauty and function. Now the homeowners’ collection of vases, purchased during trips to Israel, Morocco and other locales, glow inside lighted, glass-front cabinets set above the storage cabinets. The effect is like having an art gallery inside a kitchen.

“It makes a lovelier kitchen,” Makoski says. “We like it to be a little artistic.”

To address the lack of storage space, Makoski designed a wall of custom cabinets, including special slide-out shelves to hold the toaster and coffeemaker. These small appliances, usually left out on countertops, are out of sight but easily accessed.

“I have a lot of space that I didn’t have before,” Adrienne says.

A new, two-level island replaced the old, one-level kitchen island. The new island has an upper buffet level for serving food, and a lower level for cooking on an electric cooktop. This arrangement keeps the messy parts of meal preparation partially out of guests’ sight.

The island includes custom shelves for spices and pots, and seating on one end for causual nibbling. Custom drawers for spices and cooking utensils are stored below the kitchen island’s cooktop and within easy reach.

The new island is roughly the same size as the old one, except that the new island is a bit wider on the end with the dining bar. The asymmetry is a good thing. “A rectangular top would be so unattractive,” Makoski says. He also repositioned the island to create more space and allow easier access to the fridge.

Since the original kitchen shared its old tile floor with the home’s first floor, changing the kitchen floor meant doing the same in the dining room, living room and entryway. Adrienne was more than ready to take the plunge.

“I couldn’t change the kitchen and keep the ugly tile,” she says. She replaced the outdated tile with new, large-square ceramic tiles all through the first floor.

The kitchen flows into a kitchen nook that has two-story windows and a sliding glass door on two walls.

During renovations, the sliding glass doors were replaced with energy-efficient glass and the old window shades banished. Now Adrienne and Philip, a local dentist, eat breakfast with a view of the backyard’s pine trees. Artwork from local and regional artists decorates the kitchen nook’s walls.

Adrienne is so pleased with her new kitchen, she can’t pick out a favorite part. “It’s gorgeous; it’s functional,” she says. “I have room for all my stuff – and I have a lot of stuff. It works as a whole.”